ATC – Artist Trading Cards – have been around for a long time.  It’s a fun way to spend a crafting afternoon, explore techniques and, as in this instance, trade some of your cards for other artist’s product.

Years ago I tried to get hooked up with a local ATC swap group but never quite connected, and though I knew there were plenty online, I still just never got it going.

As so often happens, I was searching the net for something and ran across this online site totally dedicated to ATC swapping.  I was between projects and realized that hey! I still wanted to try an ATC swap.  So I signed up, picked a swap theme that looked like fun, and jumped in.

I made six of these cards, I’ll trade three for other cards, one card goes to the “host” of the swap and I’ll keep one for myself and number six ? – You’ll be able to find that one in my Etsy shop – Old Raven.

This swap had a theme featuring “What’s Through The Window”.  So pretty much anything involving a window of any type and what might be seen through that window with only your imagination as the limiting factor.

I’ve had this stamp for many, many years.  It instantly popped to mind when I read the swap title – and we’re off!

I chose a high-quality white card stock and stamped the kitty in the window using Archival Black Ink.

A thorough coating of Detail Black Fine Embossing Powder – and then using my heat gun, I turned my embossing powder to a shiny, raised, thick finish.  I LOVE that part.  Embossing powder is always fun to work with.

Can you see the results here?  Embossing an outline stamp like this one really brings out a 3-D effect instantly.  But wait until we start coloring it in.

First, I’m going to fill in the stars and moon in the ‘stain glass’ portion of this picture.  I’m using colored pencils because my next step will be watercolors and I don’t want my moon and stars to wash away or become diluted.

The colored pencils create a ‘resist’ to prevent that.

These are watercolor pencils.  You can color in an area and then using a handy watercolor brush, you can then ‘move’ your pigment around. 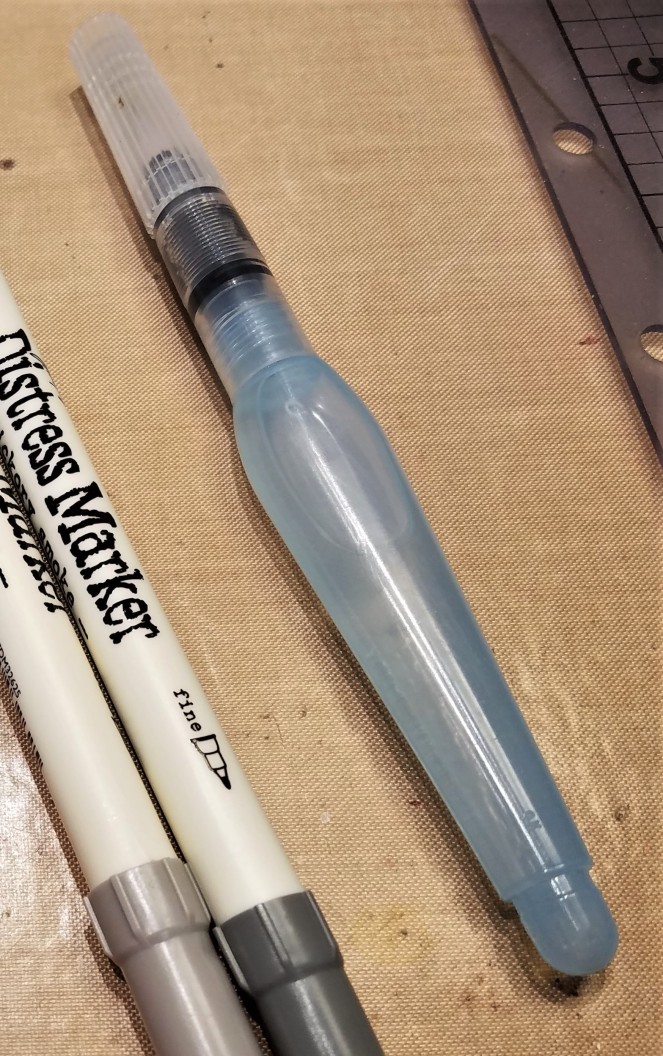 This is the handy watercolor brush.  The large barrel on this can be filled with water and there are a couple of different brush tips you can find, this one has a rather long pointed tip.

The pattern of the stained glass is a night sky, so I chose cool blues and purples for the rest of the glass colors.  I just tried to keep the colors alternated and in some places used a couple of colors, one on top of the other to make a ‘new’ color.

Then using the watercolor brush, I gently brushed water over the colors to give them that dreamy look watercolor art has, which is also a very good/authentic look for stained glass, too.  Cool.  The one on the left has had the water brush, the right is still just pencil.

As I mentioned, I made six of these cards and I kind of jumped around with the sequencing as I made them.  But at some point on all of them I cut out the starry sky section of the open window.  I put a fresh blade in my x-acto and cut it out on a cutting mat.  Unfortunately, I had to cut the cat’s whiskers off, but never fear, I’ll fix that little detail later on.

I got to play with a lot of my tools and supplies with this project. In the upper, arched portion of the window is a sun motif.  The core of the sun I colored with pencils but the rays I wanted to stand out more so I’ve switched to Distress Markers in a dark orange.  I didn’t add these markers until after I’d done the watercolor portion because they are water based and would have ‘smeared’ in the water brush stage had I used them earlier.

Apologies for the blurry pic here, it’s the best one I had for this step though.  The tray with all the little cups is a palette for Tim Holtz Distress Inks.  Using the watercolor brush, I can just pick up a little color and then start filling in where I want it. You can (sort of) see where I’m using the color Scattered Straw to fill in the window casing.  Next, I’m going to use a lovely lavender Distress Marker to fill in the inside of the casing – but first – PHOTO BOMB!

Smokey has arrived to inspect the work thus far.

“I’ll be back to check on your progress later.”  You can also see, there between her feet, the lavender Distress Marker. 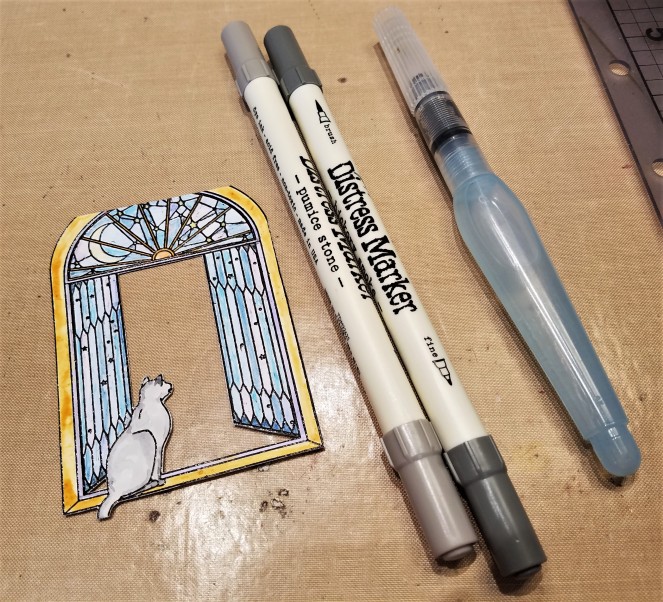 So, catching up.  You can see the lavender I added around the inside of the casing.  Using a couple of shades of gray, I colored the cat in.  There’s a couple of ways to use the markers, you can color straight onto the paper with them for a more solid color like I did when I filled in the ‘rays’ on the sun in the upper window.  Or, you can scribble some of the color on your craft sheet and then using the watercolor brush, you can pick up the color and then apply it in a more flowing application that results in a truer watercolor look, which is what I did here with the cat. Once I had the entire body covered in the lighter gray, I went in with the darker gray and put in some depth and dimension.  Smokey probably won’t approve, but I felt a tortoiseshell effect was a bit out of my league here. 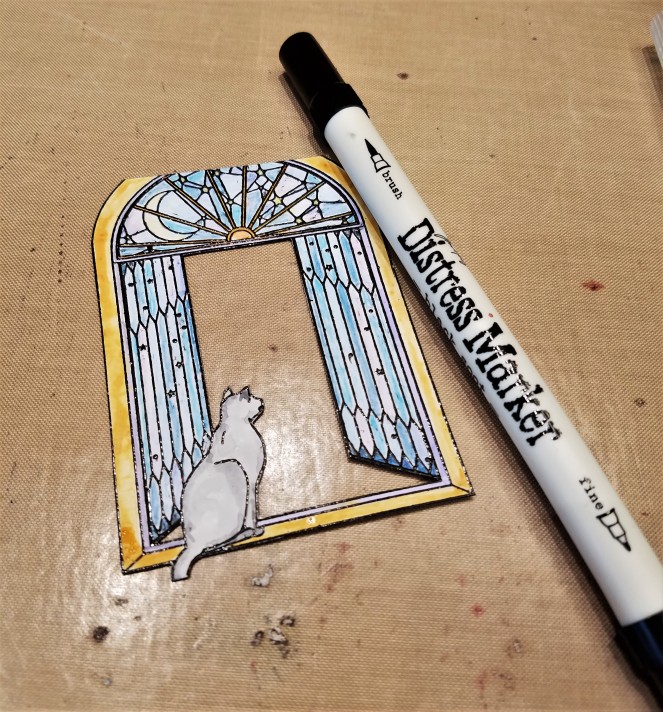 Now that everything’s colored in I’m going to use a black Distress Marker and go all around the edges to cover the white edge of the paper.  You don’t want those white edges glaring out when this all goes together.

You might be wondering why did I cut off the top of the window and the end of the cats tail?  ATCs have very few rules but one hard and fast rule is they must be 2½” x 3½”.  That’s what was so great about this stamp, it’s almost the perfect size for an ATC and though I had to trim a bit, the spirit of the stamp is still all right here.

But what’s the cat gazing at?  I found a wonderful fabric that features cats and moons as constellations.  I photoed the fabric and then shrunk it down to fit my opening.  I was even able to turn it a few times so I could show different sections throughout the six card set.

I used my fave glue – Aleen’s – to attach the constellations rectangle in place.  Next I cut six sections of black cardstock in the requisite 2½” x 3½” size and then I glued the cat window to the black card.

Remember when I said I’d fix the whisker issue? 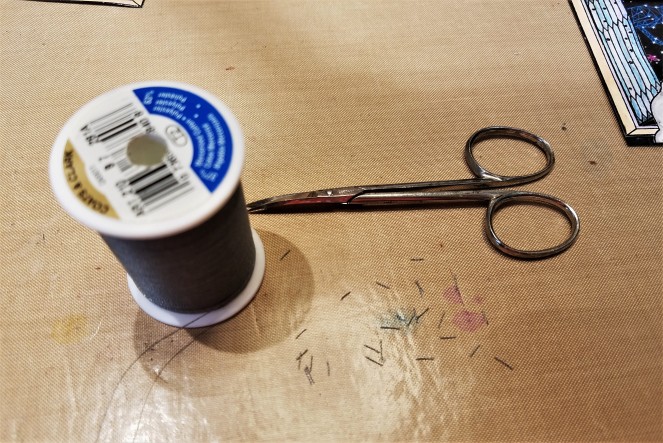 Using a toothpick, I added a very small dot of glue to the cat’s face and some very small snips of dark gray thread was the answer. 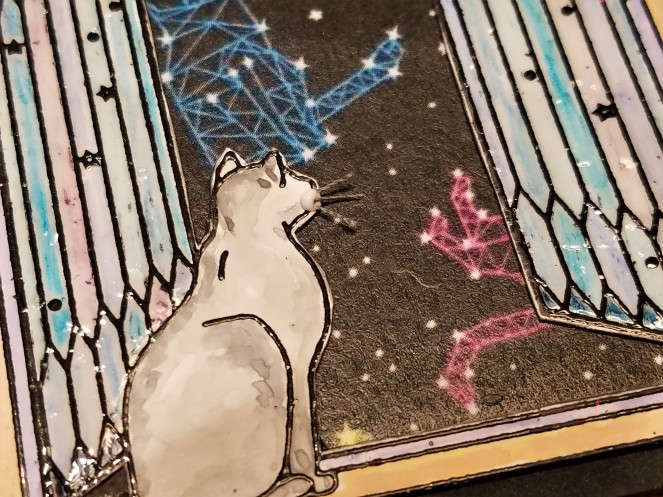 The glue will flatten out and dry completely clear with a matte finish, but now pussy cat has her whiskers back and there’s even another layer of dimension to this piece.

But there’s still one step to go.  I wanted the stained glass to look like glass.  You can see in this picture – the window panels twinkle and gleam like real glass.

There’s a couple of products I could have used with pretty much the same results.  I chose the Glossy Accents, putting a small puddle on my craft sheet, I used a small tipped brush and filled in the area where there was glass being careful not to get any on the cat or casings.  It worked great!

I really like the overall effect on this card.  By using so many different mediums it gave the card lots of depth and there’s plenty of color here, too.

I mailed off my four cards to the host of this swap today.  I’m very curious to see how this all turns out.  The host, apparently, has the job of switching my three trade cards for three other artist’s trade cards.  She then puts those three selected cards in the self-addressed envelope I included in my packet and will mail my ‘swapped’ cards back to me.

On the back of each card, we put info like the name of the swap, materials used, my email address, my signature, date card was made amongst other info that may or may not be required or added.

I wonder, will my cards hold up to the others that appear to have all been doing ATC swaps for what looks to be the last century or so?  I hope so.

What will I get back in the mail?  I can’t wait. 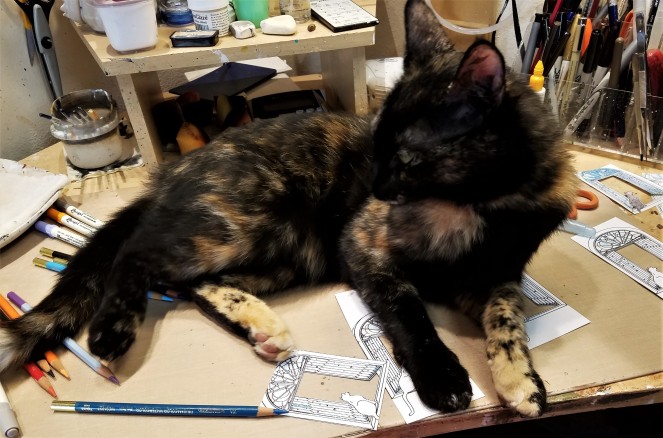 A little p.s. here:  Smokey, like all cats, is a total diva.  We originally were intent on her being an ‘inside’ cat.  But she figured out multiple ways of escaping including walking directly under the dog’s belly for cover so when we let the dog out we also, unknowingly, let the cat out, too.  At night, she would rattle the vertical blinds of our bedroom windows until we were about ready to throttle the little beast.  Finally, admitting defeat, we installed a cat door and thereby unleashed a serial murderer on the neighborhood.

This cat is the definition of ‘huntress’.  An average of at least one vole or mouse per night is normal, but 2-3 happens regularly.  And to our unending delight, there is the semi-frequent ‘catch and release’.  While the dog doesn’t try to catch the rodents she is very good at pointing with her nose as to where the furry little unit is hiding (thanks Bells) so they can be removed back into the wilds.

The cat just recently extended her range of victims to include gophers!  This cat probably weighs 5 pounds soaking wet!  How she manages gophers is bit of a mystery.

But to be fair, she does announce her arrival and we can usually tell by the muffled meows when she’s “packing” and we’re getting pretty quick at jumping up and intercepting the spoils before they can hit the floor running.

2 thoughts on “ATC Swap – What’s Through The Window”